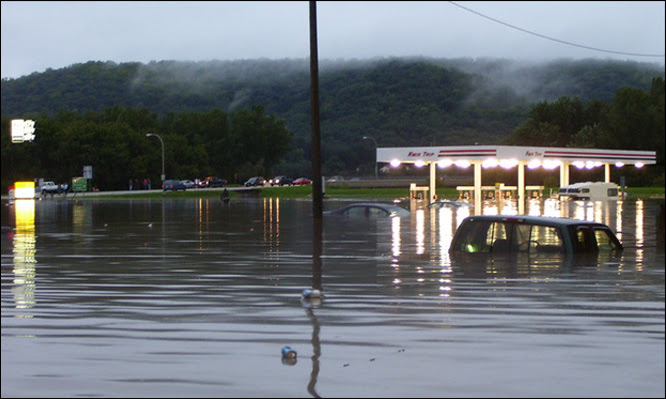 In many ways, Minnesota is defined in the popular imagination by our boundless opportunities for enjoying the outdoors. Our thousand lakes and the cool, pure air and water of the North Shore attract visitors from around the world. But Minnesota’s water and air are not immune to the dangers of climate change, and the summer’s weather has had very real impacts on these resources and all of us who live among them.

In June and July, Minnesota faced some of the worst flooding in our history. 29 counties were impacted by severe water levels from a series of unusually powerful thunderstorms. Power lines and bridges were damaged, and public park areas were littered with debris and storm water. In a letter to President Trump requesting a federal major disaster declaration, Governor Mark Dayton provided a damage cost estimate for the state of Minnesota of over $22 million. While it’s difficult to trace these monumental floods directly to our warming climate, we know that the storms were exacerbated by a system of hot air and high pressure above the state. And it’s evident that severe weather events like these so-called “100 year storms” are becoming more frequent.

Not long after the state was inundated with rainfall, Minnesota began suffering from another climate-influenced disaster: Canadian wildfires. As of this writing, the MPCA has issued an air quality alert for nearly the entire state of Minnesota during the weekend of August 17 – August 19 due to fine particle pollution released by these wildfires into the atmosphere. These particles are especially dangerous to children, older adults, and people with asthma or heart disease, but even healthy Minnesotans have been urged to avoid strenuous outdoor activities.

Wildfires are not uncommon in the western U.S. and Canada, but it’s become evident that evaporation caused by climate change (which also increases the chance of severe storms) is drying out the landscape, worsening these fires around the world, even in forests above the Arctic Circle. And with increasingly hot spring and summer temperatures in the mix, air quality problems will become more common in our state, threatening harm to all, especially the 400,000 Minnesotans who have asthma.

Climate change is no longer a menace on Minnesota’s horizon – it’s hurting us here and now. We need immediate action to deal with both its causes and its consequences.

What Minnesota can do

As we outlined in our August 4 article, Minnesota’s clean energy economy is growing, but that growth must be accelerated. With electricity becoming less reliant on coal and more on wind and solar, our state’s transportation sector is now our number one source of emissions. We need to make timely, significant investments in clean transportation, including electric vehicles, public transit, and infrastructure that makes it safe and easy for Minnesotans to walk and bike. We must also raise our vehicle emissions standards, not lower them as the Trump Administration intends, to make vehicles more efficient and further protect people with respiratory conditions.

We should increase our investments in perennial and cover crops that pull carbon dioxide out of the atmosphere all year round. These provide the combined benefits of cutting our net emissions, protecting our water resources, and even reducing erosion on fields hit with heavy rainfall.

We need to ensure that our cities have the resiliency they need to weather changing climate conditions. New stormwater infrastructure, especially “green infrastructure” that allows soil and plants to soak up excess water – is needed by many communities.

Minnesotans can’t afford to wait for these solutions. Our next Governor and Legislature must ensure that climate action is a top priority.