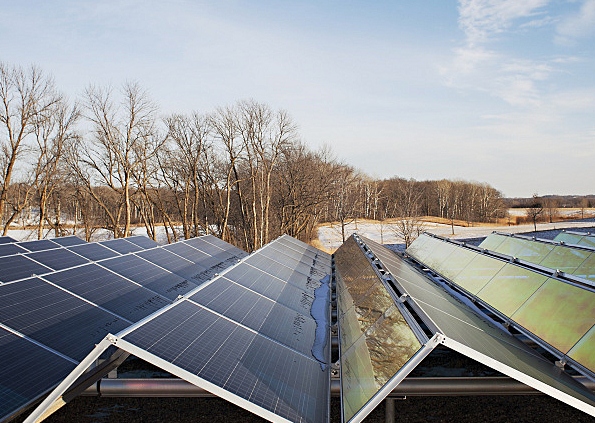 This week was an important one for the future of clean energy and climate change in Minnesota, the U.S., and the world. The McKnight Foundation released a report projecting how Minnesota can meet our goal of reducing greenhouse gas emissions by 80% by 2050. The green economy reached a milestone of one trillion watts of wind and solar power capacity installed around the world as development of renewables continues at a tremendous pace. And while the Trump Administration announced plans to scrap critical vehicle emissions rules that save lives and money and cut carbon pollution, this move was almost immediately challenged by Attorney Generals from twenty states and the District of Columbia. These developments represent the key questions faced by Minnesota: can we fully commit to decarbonization of our economy, and how fast can progress be made?

The McKnight Foundation’s findings show that, with the right investments in electrification and infrastructure, the transition to an economy in which the vast majority of power comes from clean, renewable sources is entirely feasible for Minnesota. Notably, it finds that Minnesota can retire its coal plants and both the Monticello and Prairie Island nuclear power plants as their licenses expire and still meet consumer needs, while reducing the role of petroleum in transportation. The already-high job creation rate in the clean energy sector would triple. And this is an affordable proposition for consumers: Minnesota households would enjoy average savings of $600-$1200 on energy every year by 2050.

Reaching this clean energy scenario will require shifting over oil and gas-powered technology, like vehicles and heating, to electric power. And Minnesota will need to upgrade infrastructure to ensure that the power grid is flexible and able to meet demand. But the McKnight analysis shows that Minnesota doesn’t have to trade stability and cost savings for clean power – we can have both, rather than gambling on the fluctuating costs of oil and gas. With wind already supplying a quarter of our electricity, we can build on a strong renewable base and harness untapped potential.

The global renewable boom shows no signs of slowing

Bloomberg NEF determined this week that the world’s energy developers reached a trillion watts (one terawatt) of wind and solar capacity early this year after forty years and more than two trillion dollars of investment. But it won’t take another 40 years to lap this milestone – Bloomberg estimates that the next terawatt will be installed around the world by 2023, and cost half as much. And as new technologies and momentum from companies and communities increases, these costs – and implementation times – will continue to drop. That doesn’t minimize the critical role that good public policy plays in speeding up this transition to protect human health and mitigate climate change, but it shows that clean energy is holding its own, and that we should avoid investing in new fossil fuel infrastructure.

The Trump Administration seeks to allow dirtier-running vehicles, but states vow to fight back

The Trump Administration’s push to roll back Obama-era tailpipe admissions standards would allow cars nationwide to be made less efficient, and remove the ability of states like California to set their own tougher standards. The move might be celebrated by the fossil fuel industry, but the rollback – which nominally aims to protect Americans from unsafe vehicles and high costs – would be a blow to health, safety, fuel cost savings, climate change mitigation and the competitiveness of our auto manufacturing. These emission standards help reduce harmful vehicle-emitted pollutants, which are especially harmful to the more than 400,000 Minnesotans who suffer from asthma. They also spur innovation and efficiency that save on fuel costs.

Fortunately, the federal plan to roll them back is of questionable legality, and on Thursday, a group of twenty Attorneys General from around the country – including Minnesota – announced they would go to court to challenge the decision.

It has become increasingly clear that regardless of federal action, Minnesotans can and should make a rapid and economy-boosting transition to renewable energy in our homes, cars, and businesses. We have the power and tools we need to make affordable, clean energy available to every person in our state. All we need is for our political, business, and community leaders to seize the moment and ensure that Minnesota leads the way to the clean power economy of tomorrow.