Join the North Star Energy Coalition for a rally Tuesday, January 8 at the Capitol Rotunda with speakers from Idle No More, Indigenous Environmental Network, and Sierra Club North Star Chapter to stop the Enbridge Alberta Clipper expansion and dirty tar sands. Check out Facebook for details! 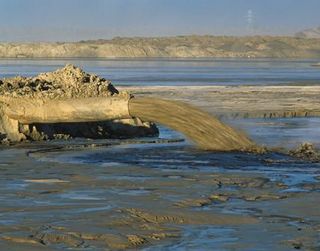 The State Department finds itself in the uncomfortable position of being the lead permitting agency for tar sands pipeline projects that would bring dangerous Canadian bitumen into the U.S.

Tar sands pipelines bring with them enormous public health and environmental hazards, making the Environmental Protection Agency (EPA) or another agency that specializes in public health and safety a more obvious fit. But because these pipelines cross an international border, the job falls to State. In this role, the State Department has been slow to prioritize the broader public interest over diplomatic relations with the pro-tar sands Harper government in Canada. But State seems to be coming around to its larger responsibility to the American public.

This week the State Department announced that it will prepare a new environmental impact statement (EIS) and collect public comments on Enbridge’s proposed expansion of its Alberta Clipper tar sands pipeline – one of only two major trans-boundary tar sands pipelines in the U.S. This welcome move by the State Department marks a change in direction for their regulatory oversight of these projects.

Although advocates have long insisted that major alterations in tar sands pipeline systems should trigger new environmental reviews, our requests have mostly gone unheeded. For instance, in 2008, Enbridge applied for a Presidential Permit to reverse the flow of an existing crude oil pipeline and use it to transport diluent for bitumen (the tar-like hydrocarbon that tar sands “oil” comes from). Despite the fact that this constituted a major change in use and content for the pipeline, State responded that no new Presidential Permit was necessary because there would be no new construction at the border.Also in 2008, the State Department did not require a review for the Portland-Montreal company’s proposal to reverse the flow of their decades-old pipeline through New England to export Canadian tar sands via the coast of Maine. State’s decision this week sets a new precedent for environmental review of these kinds of energy projects. Major changes in massive, dangerous fossil fuel infrastructure projects, which will impose new and unique environmental risks, warrant fresh environmental analysis and new opportunity for public input.

In this case, Enbridge wants to expand its Alberta Clipper (or “Line 67”) pipeline, which transports tar sands from Alberta through North Dakota and Minnesota to Superior, Wisconsin. Enbridge, the company responsible for the million gallon Kalamazoo River spill two years ago, hopes to pump an additional 350,000 barrels per day under the rivers, lakes, streams and farms of North Dakota, Minnesota, and Wisconsin. This means an additional 350,000 barrels per day of heavy, toxic, corrosive tar sands being blasted against the inside of the pipeline — increasing the risk of a spill and increasing the danger and size of any such spill.

In November 2012, more than 30,000 Sierra Club activists sent letters to the State Department asking them to require a new Presidential Permit for this expansion — and to conduct a new review of the potential impacts of this expansion. We are truly relieved the State Department has listened. Now we must work to ensure that this review is comprehensive, and that the State Department ultimately determines that 350,000 more barrels per day of the dirtiest, most-carbon intensive fuel on earth is simply not what our country needs.