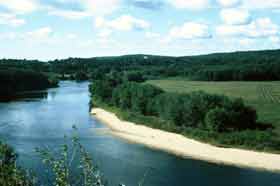 Wednesday, November 1 marked the deadline for Minnesota farmers to comply with the buffer law, which mandates that farms keep a 50-foot strip of perennial vegetation between their cropland and the streams and ditches that feed into Minnesota’s lakes and rivers. The law, passed in 2015, seeks to tackle the problem of agricultural runoff by implementing these strips to filter that runoff before it enters Minnesota waters. Though the buffer debate has been contentious, the Board of Water and Soil Resources estimates that over 95% of farmers are now in compliance with the law.

The vegetation grown on a buffer strip varies, but the general process is to rely on perennial vegetation’s root systems to absorb a portion of the pesticides and fertilizers that flow downstream. Pesticides in our rivers can kill off native wildlife and harm humans who drink or recreate in the water. Nutrient fertilizers cause harmful algal blooms that leave lakes and estuaries unlivable for fish and other animals. Nitrates in particular pose a health threat – over time, they leach into groundwater that people rely on for drinking, and can cause birth defects in the lungs of infants if consumed by pregnant women.

It’s important to recognize that this buffer law isn’t a cure-all for agricultural pollution. The law allows for the perennial vegetation on buffer strips to be used for other purposes, such as harvesting or grazing, that can reduce the strips’ effectiveness. Even under ideal conditions, not all of the nutrient pollution is filtered from entering lakes and rivers.

But an admittedly imperfect buffer law is still an important step toward restoring Minnesota’s waters, and comes at a critical time. Cities like Adrian and St. Peter, and residents with private wellsthroughout the state, have incurred enormous financial costs to treat water contaminated by nitrates. Buffers may present  farmers with costs of their own, but even prior to the law, a large majority of farmers already implemented buffers. Working to combat runoff pollution by leveling the playing field for farmers is a fair and reasonable policy.

Much more action is needed to restore and improve Minnesota’s water quality and make drinking water safe and accessible for all residents. The buffer law is a helpful step in the right direction, and we commend Minnesota farmers and communities for taking on this clean water challenge.