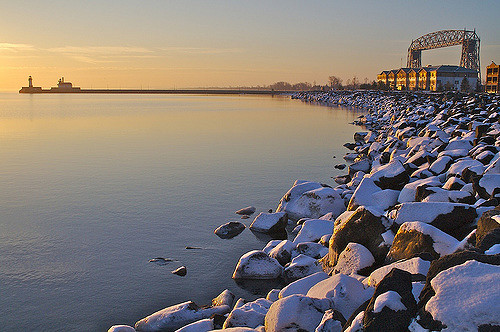 On Tuesday, November 27, the U.S. House of Representatives passed a major piece of legislation, the U.S. Coast Guard Authorization Act of 2017, which was passed by the Senate earlier this month. The bill, now awaiting a Presidential signature, contains legislation called the Vessel Incidental Discharge Act (VIDA), which changes how ballast water carried by ships in the Great Lakes is regulated.

MEP spoke out against previous versions of VIDA, a bill which deeply threatened the communities and ecosystems around the Great Lakes. But thanks to the efforts of Great Lakes defenders, the new VIDA was enormously improved and allows an opportunity to move forward on keeping our lakes healthy.

Ballast water is carried by oceangoing ships as part of their ordinary operation, but if left untreated and dumped into our freshwater harbors, it can spread invasive species from around the world into our waters – in fact, it is the number one source of new invasive species – such as zebra mussels and bloody red shrimp – infiltrating the Great Lakes basin. Left unchecked, these new species carry the risk of major harm to our ecosystems and our economy, especially for lake-based cities like Duluth.

State and federal authorities have made efforts to regulate ballast water and prevent these infiltrations from occurring, partly using powers granted under the Clean Water Act. The previous VIDA legislation would have undone the significant progress we’ve made. It would have watered down these protections and made it difficult to build on them at the federal level. VIDA also aimed to prevent states from developing their own ballast water regulations in response to federal inaction.

The new VIDA isn’t perfect, but it offers hope for solutions

Thanks to the commitment of Great Lakes advocates and lawmakers, the new VIDA legislation that passed this month has been cleaned up significantly in the interest of compromise and taking reasonable action to protect the Great Lakes. Both Minnesota U.S. Senators Klobuchar and Smith were directly engaged in blocking the earlier harmful version and helping to develop a better compromise.

It still preempts states from setting their own ballast water protections, but it does give them the power to band together to develop a regional Great Lakes basin standard. In addition, the state standards will be valid until a new, region-wide standard for ballast water is fully implemented. And the legislation requires the EPA and the Coast Guard to work together with state authorities to determine measures to counter invasive species.

At the federal level, VIDA strengthens and solidifies existing protections that require ships to manage their ballast water safely, and specifically requires that the federal protections be as strong as or stronger than current EPA requirements. It includes $50 million in funding to monitor invasive species in the Great Lakes watershed and to research new methods to handle ballast water treatment, with grants for mitigation to be developed as well.

For the sixty million people and countless fish and wildlife that live around the Great Lakes, this new legislation is an important step in blocking harmful rollbacks of existing environmental protections. We thank the lawmakers who negotiated this bipartisan compromise to improve the original VIDA, and all the citizens from around the Great Lakes who made their voices heard and made a real difference.