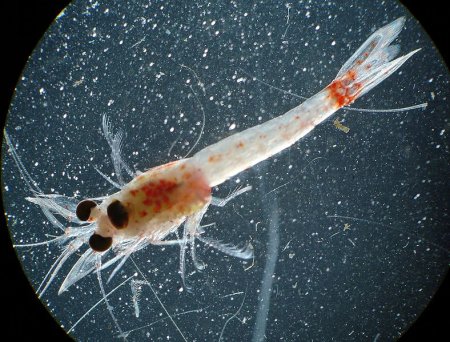 This week, the Wisconsin Department of Natural Resources announced that a single specimen of the bloody red shrimp species had been discovered in water samples collected from the Duluth-Superior harbor area in the summer of 2017. This tiny freshwater shrimp, native to areas near Russia and Ukraine, has begun to infest the Great Lakes, carried to North America in the ballast water of ships. Previously, it had only been found in watersheds as far west as Lake Michigan – the dead specimen in the Twin Ports is the first in Lake Superior, and it’s not yet clear whether this lone shrimp represents an infestation.

It’s also unclear what effect the current population of bloody red shrimp is having on the Great Lakes since its discovery here in 2006, but the impact of other invasive species on the native ecosystems has often been strikingly negative. Species like the quagga mussel and blood-sucking lampreys have greatly harmed existing species of fish and invertebrates, creating real problems for the Great Lakes economy and ecology.

Fortunately, U.S. and Canadian regulators have worked to slow the spread of these invasive species by requiring ships to change their ballast water before entering the Great Lakes waterway, thus flushing out invasive stowaway species from foreign waters. Current federal rules also mandate that by 2021, any oceangoing ships entering U.S. ports must have ballast water treatment systems.

Unfortunately, a bill in the U.S. Senate would roll back these critical protections. The Commercial Vessel Incidental Discharge Act (also known as VIDA or CVIDA) would transfer regulatory authority for ballast water to the Coast Guard, watering down its enforcement in the process. It would also delay improvements to the current ballast discharge standard and introduce exceptions that would create openings for invasive species to infest previously safe watersheds.

For instance, this legislation would roll back protections aimed at keeping invasives that have already become established in other Great Lakes, such as Lack Michigan, from being transferred to our clearer Lake Superior. Such as in the case with the bloody red shrimp. And it would remove state authority to act to protect Lake Superior and eliminate the rules on water treatment technology, increasing the chances of invasive species slipping through the cracks in the future.

The VIDA legislation would undo significant progress in protecting the Great Lakes from invasive species. As tiny as the bloody red shrimp is, it’s representative of a much greater danger to our lakes and the millions of people who make their livelihoods around them. If you’re concerned about invasive species threatening our shores, call your federal lawmakers in the Senate and House of Representatives, and tell them to reject VIDA and keep our Great Lakes healthy!