Bicycling more and driving less offers numerous advantages, both for the individual as well as the community. As a transportation alternative, bicycling benefits public health and safety, reduces transportation costs and fuel consumption, decreases traffic congestion, boosts the local consumer economy, and reduces environmental impacts, among other things. While we certainly believe the economic, individual and public health, and quality of life benefits are important, this post focuses on some of the important and perhaps surprising ways in which cycling affects the environmental impact of our overall transportation system.

One oft-touted perk of cycling is a “zero-emissions” form of transportation. This of course is over-simplified – and slightly overstated – but it is true that the greenhouse gas (GHG) emissions that result from riding a bike are far less than other forms of transportation. The European Cycling Federation (ECF) recently published a study comparing the emissions from different forms of transportation and was able to quantify the emission of carbon dioxide (the most abundant GHG) resulting from the production, operation, and maintenance for bicycles, cars, and buses (1). They calculated that riding a bicycle contributes about 21g of emissions per kilometer traveled. Of that amount, 16g is attributable to the “fuel” – the food energy consumed by the rider. Since food is quite literally a cyclist’s fuel, their already-minimal emissions could be reduced much further by consuming a diet featuring local and sustainable menu choices. It should also be noted here that the emissions for electric-assist bikes was calculated to be an almost-identical 22g/km. The emissions for a bus at average occupancy was found to be about 101g/km per passenger, or approximately 5x the emissions of riding a bike. The emissions for automobiles was calculated conservatively taking into account average number of passengers, size and efficiency of the vehicle, and type of driving. In this study, they reported an average for European drivers of 271g/km, or 13x more greenhouse gas pollution per distance traveled compared to a bike. Since the actual distances traveled are on average much greater for motorized transit, the relative benefit of cycling is even greater. Increasing cycling in our transportation mix and thereby reducing usage of motorized vehicles will reduce the overall emissions from our transportation systems. 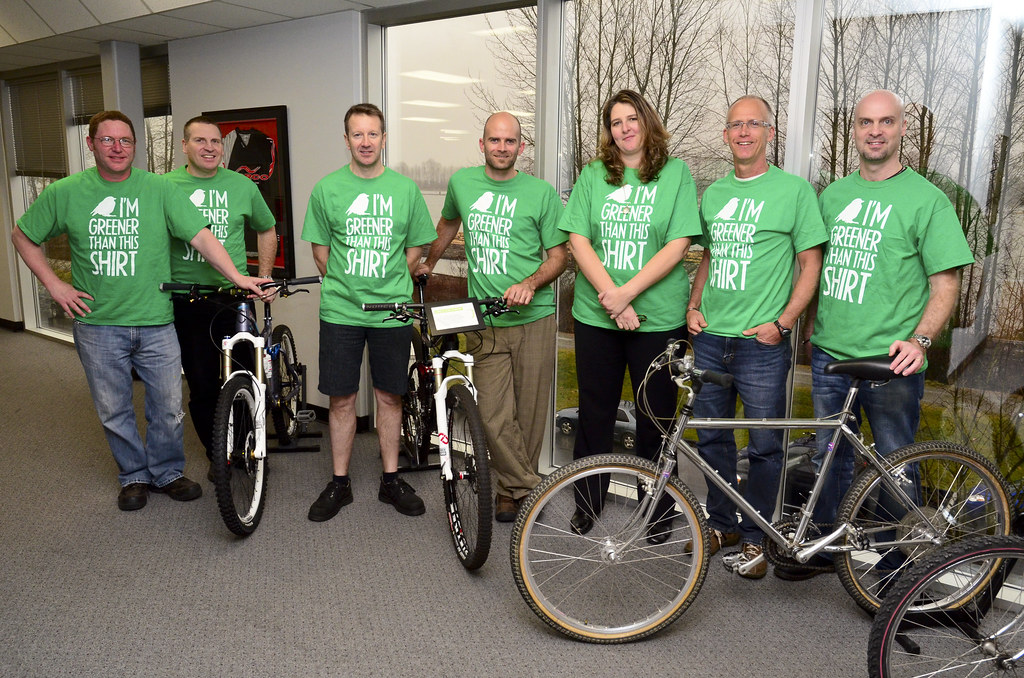 The ECF analysis only considered the GHG emissions, particularly carbon dioxide; these are considered harmful emissions due to their potential to influence climate change. As many people now realize, global climate change is recognized as a significant environmental challenge and has been linked to many serious public health and safety issues (including rising sea level, increased severe weather events and intensity, water scarcity, loss of agricultural productivity, species loss, air pollution, ocean acidification, and more). Motorized transportation is also associated with particulates and other forms of air pollution which are considered harmful to the environment and human health but were not considered in the above study. The more than communities can support transitioning to less-polluting transportation, the easier and less costly it will be to mitigate against the future impacts of these harmful emissions. As a transportation alternative, cycling certainly offers significant reductions in GHG emissions compared to motorized vehicles.

The ECF analysis also did not attempt to quantify the impact resulting from the infrastructure of each modality, but this is certainly another distinct difference between active- and motorized-transit. In another recent study done by the San Francisco Bicycle Coalition, they found that the cost of building protected bikeways was more than 100x less expensive per mile than roadways (2). The total distance of bikeways also tends to be smaller, and the associated maintenance is less frequent, so again the relative benefits are even greater than the figured cited. Beyond the costs, there are significant differences in the environmental impacts resulting from the infrastructure of different transit systems.

In addition to the costs of building and maintaining motor vehicle infrastructure, another significant impact is the physical space that is occupied by the infrastructure. A typical cloverleaf intersection, for example, occupies 10-20 acres of space. More and larger roadways increases the distance between destinations, and is a major contributor to urban sprawl and habitat loss for wildlife. More cars also require more spaces for parking, especially with many city ordinances requiring businesses to provide abundant parking even if it rarely is fully occupied. The ECF study estimated that parking spaces alone might increase the total impact of automotive transit by 10% — an additional 27g/km, and more than the total impact of using a bicycle. In many US cities, automotive infrastructure accounts for 33-50% of the total area of a city. This is an astounding figure, and yet many people simply accept this reality as an inevitability of modern society. By decreasing the use and dependence on cars, bicycles allow higher-density more efficient urban development which reduces costs and impacts.

A hyper-abundance of motor vehicle infrastructure and the associated urban sprawl is negatively correlated with measures of community walkability and quality of life. The further apart places are located and the more roadways between those places, the more challenging and dangerous it becomes for pedestrians and cyclists to travel within their communities. The impermeable surfaces which nearly always comprise this infrastructure are further associated with more detrimental environmental impacts, including increased stormwater runoff, water scarcity, and the urban “heat island” effect. Because the automotive infrastructure is impermeable to surface precipitation, it creates runoff which must be managed rather than allowed to absorb into the ground or natural systems and can lead to erosion, flooding, and pollution of surface waters from oil and debris found on and along roadways. As the surface runoff is carried away into larger bodies of water, it isn’t allowed to absorb into the ground where it would eventually seep into the underground aquifers that many communities depend on for drinking water, agriculture, and industrial uses; in this way roads also contribute to water scarcity. And because the infrastructure absorbs solar radiation during the day and re-radiates it into the atmosphere, it increases local temperatures in an effect known as the “urban heat island”. It is estimated that this effect might account for as much as 10 degrees (F) of heating in urban environments on sunny days. All of these negative impacts can be reduced by increasing the share of safe and convenient active-transportation choices in our overall transportation system.

CJ Lindor is an Education Specialist with the Bicycle Alliance of Minnesota. The Bicycle Alliance of Minnesota envisions a state where cycling is a safe, easy, fun, and cool choice for everyone and where bicycling is truly integrated as part of the transportation system. To that end we advocate for bicycling and educate both children and adults throughout the state with the goal of more people bicycling more often.

If you want to learn more about and support these efforts, please visit www.BikeMN.org

One Response to “The Environmental Benefits of Cycling for Minnesota”