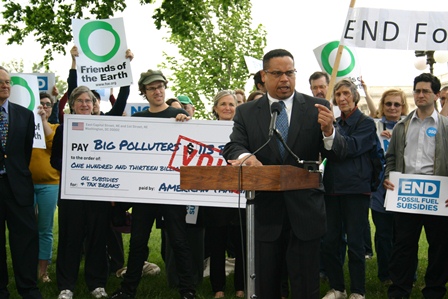 Every year, massive oil companies like Exxon and Chevron make headlines for the billions in profits they rake in at the expense of our environment, our economy and the health of our families. And every year, those exact same companies reap the benefits of tax giveaways that are expected to total more than $110 billion over the next decade.

Today, Senator Bernie Sanders (I-VT) and Representative Keith Ellison (D-MN) offered a solution at a press conference today backed by a coalition of environmental and taxpayer groups. These two environmental champions introduced the “End Polluter Welfare Act”in the House and Senate, calling for a halt to this economic absurdity with the most comprehensive legislation to end tax subsidies for oil companies to date.

Sierra Club proudly supports this common sense bill and – as Rep. Ellison noted today – so do a vast majority of Americans. 80 percent of Americans agree – it’s time to put an end to tax giveaways for big polluters.

“The fossil fuel industry considers us their servants,” said Sanders at a press conference held outside the U.S. Capitol Building today. “They don’t deserve it.”

While oil executives roll in record profits, they’re demanding tax handouts to support the very industry that puts the health of our kids at risk. There is no reason that American taxpayers should be forced to invest in the bloated dirty energy industry of the 19th century when the clean energy economy is already creating tens of thousands of new American jobs while protecting our families. Rather than supporting dirty, outdated fossil fuels, we should be investing in efficient technologies that will benefit every American – not just a handful of billionaire CEOs.

Still, Big Oil has fought tooth and nail to protect their subsidies before – and they’re guaranteed to fight this legislation, too. That’s why Rep. Ellison says the fight is just beginning.

“We have to work together to get the rest of the voices of the American people heard,” he said. “Spread the word – the coalition is not yet big enough.”