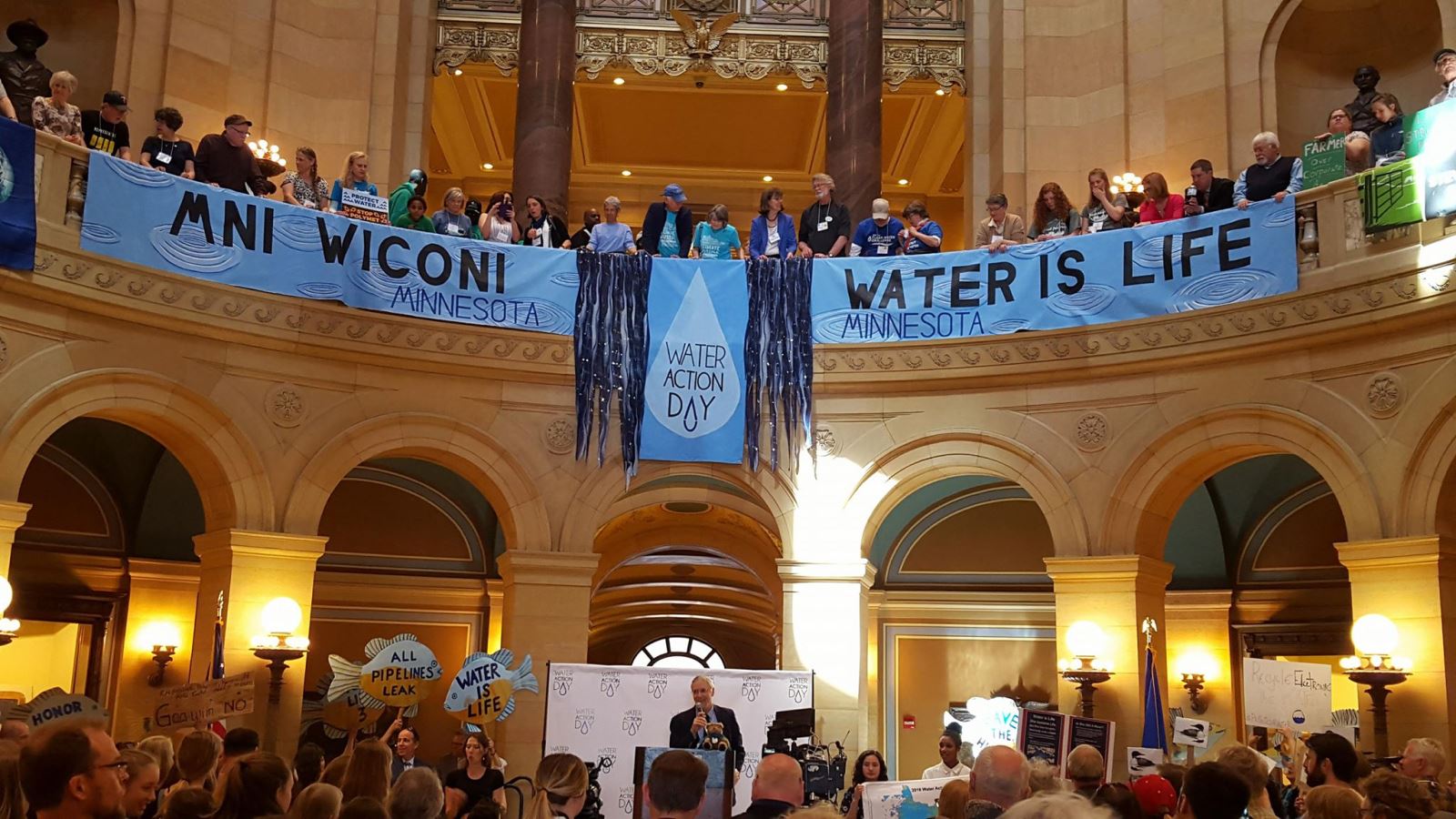 More than six hundred Minnesotans gathered on Wednesday, May 2 at the State Capitol with a critical demand for lawmakers: take action to protect Minnesota’s waters. Hundreds of attendees spoke out on their water concerns, but were united by the belief that the Legislature should work to strengthen – not roll back – Minnesota’s environmental protections.

The day began at Christ Lutheran Church near the Capitol, where attendees had breakfast and learned about water issues facing Minnesota. Experts from groups including WaterLegacy, Land Stewardship Project, Friends of the Mississippi River, and the Minnesota Environmental Partnership presented policy briefings throughout the morning. The film Troubled Waters was screened in the sanctuary.

Throughout the day, participants shared their concerns in over 140 meetings with legislators. Dozens of students and youth met with members of Governor Dayton’s administration to discuss their water and environmental priorities at the Capitol. 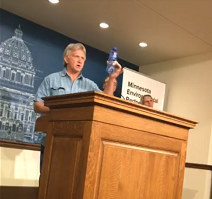 At 12:30, Water Action Day organizers held a press conference at the Capitol featuring farmers and well owners speaking out on nitrate contamination of Minnesota’s groundwater. Steve Morse, MEP’s Executive Director and the author of the 1989 Groundwater Protection Act, described the nitrate crisis that is making Minnesotans’ drinking water increasingly undrinkable. He explained how the Minnesota Department of Agriculture (MDA) is finally developing a framework to implement key provisios of the Act, and the unfortunate effort in the Legislature to derail it.

Arlene Nelson, an Winona County dairy farmer and Land Stewardship Project member, told of how nitrate levels in her farm’s drinking water well had risen from 3 ppm (parts per million) to 48 ppm, far beyond the Health Risk Limit of 10 ppm,  in 25 years. She traced this alarming development to changes in farm practices in her area with increased corn and soybean production coupled with livestock confinement.

Nelson’s family was forced to spend more than $25,000 to drill a deeper well to get safe drinking water – but that is not the solution to our groundwater pollution problem.  She argued that the Governor’s proposed Groundwater Protection Rule would save farmers time and money, both on fertilizer and on the enormous cost of water treatment and new wells.

Gary Trogstad of Eyota and Representative Clark Johnson of North Mankato spoke to these costs directly. Trogstad lamented that he had to drill an expensive new well due to nitrate contamination, and worried that this well would become contaminated as well if nitrates remained unchecked.

Rep. Johnson noted the residents of St. Peter pay significantly higher costs for their drinking water because it needs to be treated when it comes out of their wells. He indicated that the Groundwater Protection rule made perfect sense, especially with most farmers in compliance with the fall fertilizer restrictions already.

Dairy Farmer and Land Stewardship member Darrel Mosel of Gaylord shared how he achieves high corn yields without applying nitrogen fertilizer in the fall, and thanked the MDA for working on the issue to help Minnesota lakes and groundwater.

Finally, Director of the Minnesota Well Owners Association Jeff Broberg talked about the impacts of high nitrate levels on himself and his community, and urged farmers and regulators to work on solutions to the problem. “One reason I appreciate the MDA’s Groundwater Protection rule,” he said, “is that it encourages people to get together so they can figure out what to do.”

Minnesotans join their voices for water

Hundreds of attendees later filled the Capitol rotunda for a clean water rally, emceed by Don Arnosti of the Izaak Walton League and featuring speakers from around the state. Governor Mark Dayton was unable to give a speech as planned, but his Senior Water Advisor, Anna Henderson, presented his proclamation, declaring May 2 to be Water Action Day and recognizing the immeasurable value and unique challenges of protecting Minnesota’s water.

Winona LaDuke of Honor the Earth spoke on the protection of water, land, and indigenous rights for the present and for the future. LaDuke called out Enbridge Energy’s demand for a new oil pipeline despite there being six oil lines in Minnesota already, suggesting that Enbridge should instead “send those pipes to Flint, Michigan, where they need pipes!” Former U.S. Senator Dave Durenberger, a chief advocate for the 1990 Clean Water Act Amendments shared the history and progress of water protection in Minnesota, ending with a call for Minnesotans to vote in the November election “to make your voice heard on your values in this state.”

Finally, farmers Darrel Mosel and Land Stewardship Project member Audrey Arner spoke on the role of agriculture in protecting Minnesota’s water. Mosel lamented that he and his two sons could not swim or fish in the polluted local lakes in southern Minnesota. He called for good practices to support cover crops and timely fertilizer application to help heal the state’s waters.

Finally, Arnosti concluded the rally with a call to action: “We all have a choice this November. Vote! Make sure you vote for water!”

Following the rally, Ojibwe jingle dress dancers performed a ceremonial dance on the steps of the Capitol in honor of Minnesota’s waters.

The Minnesota Environmental Partnership thanks all of the attendees, volunteers, donors, and staff who made Water Action Day 2018 a success! We especially thank all of the following groups for their sponsorship and engagement:

Thank you for joining us, and we hope you’ll help keep up the fight to protect our water!

2 Responses to “Minnesotans Demand Clean Water at the Capitol”