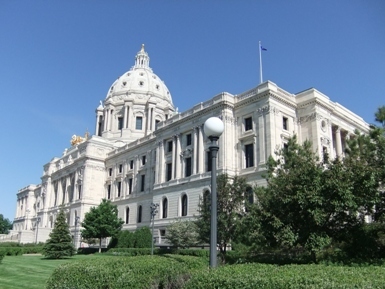 As we approach the end of the first month of the 2017 session of the Minnesota Legislature, a number of bills are moving quickly. While high-profile issues such as health care dominate the headlines, no issue area has seen more activity so far than energy; three major bills are already awaiting action on the House floor, which could happen as early as this week. Senate companions for all of these bills are also scheduled for committee hearings this week.

Two pending bills are directly aimed at eliminating or circumventing the authority of the Minnesota Public Utilities Commission (PUC). While not a well-known decision-making body, the Commission plays a critical role in protecting ratepayers and other stakeholders as utilities make decisions about current and future energy generation.

The Legislature is likely to consider a number of measures this session intended to restrict the ability of the PUC to do its job on behalf of Minnesotans. These first two measures are almost certainly just the tip of the iceberg:

This past October, the Minnesota Public Utilities Commission (PUC) approved Xcel Energy’s Integrated Resource Plan. Significantly, this approval locked in retirement dates for two large coal boilers (“Sherco 1 and 2”) located in Becker, MN. As part of their Resource Plan, Xcel had proposed a new natural gas-fired power plant be built on site in Becker. Following standard practice, the Commission invited Xcel to apply for a Certificate of Need for new generation. The Commission chose not to determine the type of generation prior to the Certificate of Need process. Again, nothing out of the ordinary.

Legislation introduced by Rep. Jim Newberger and Sen. Andrew Mathews would bypass the Commission completely, ending the current process and granting Xcel the ability to build its plant as proposed, with no check on the appropriateness of the size or type of generation being used.

This legislation sets a dangerous precedent, removing the one protection that exists to prevent monopoly utilities from over-building at the expense of their ratepayers. The Sierra Club, which was a formal intervenor during the resource planning process at the PUC, supports allowing the Public Utilities Commission to continue doing its job to protect ratepayers and consumers, and opposes this bill.

In 2015, the Legislature passed a bill allowing rural electric co-ops to apply fixed charges to their customers who install small-scale solar or wind projects and use net metering. Net metering allows solar and wind customers – such as home-owners, famers and small businesses – to sell their excess electricity back to their utility.

Since this law took effect, twenty local coop boards have moved forward with applying these new fixed charges on their solar customers. The result is an overall cost increase sufficient to, in many cases, deprive renewable customers of any economic benefit from their investment. Some of these customers have opened a new docket at the PUC seeking help in resolving their disputes with local co-op boards. This is a protective measure that these customers are entitled to under current law.

In response, new bills introduced by Rep. Dave Baker and Sen. Bill Weber would remove the PUC from having any role in mediating disputes such as these. This would eliminate the only protection in state law for solar customers living in electric co-op service territory (between 20 and 25 percent of total ratepayers in Minnesota are served by co-ops). The Sierra Club opposes removing this protection.

Justin Fay is Senior Chapter Representative for the North Star Chapter and represents the Chapter at the Minnesota Legislature.