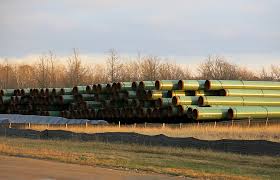 This week, we learned that Enbridge, the Canadian company pursuing a pipeline across our precious lands and waters, spent $5.34 million on lobbying in Minnesota in 2017. Enbridge’s lobbying costs were greater than any other lobbying interest’s one-year spending in the last decade. $5.08 million of the total went toward lobbying the Public Utilities Commission (PUC) to approve Enbridge’s proposed Line 3 “replacement” pipeline. The new Line 3 would replace the current, aging Line 3 and double its maximum capacity to 760,000 barrels of tar sands oil per day, carrying the oil from the Alberta tar sands through Minnesota to Superior, Wisconsin.

There’s no inherent problem with lobbying the PUC or the Minnesota legislature – it’s important that stakeholders make their concerns heard on energy issues. But this level of paid lobbying by one organization hasn’t been seen in Minnesota for a decade – so why did Enbridge spend 1 in 14 of all lobbying dollars in the state in 2017?

1.) The Line 3 pipeline would be a financial boon for Enbridge – even if it isn’t needed – and they can pass the high costs of lobbying on to consumers. Pipeline companies’ profits are set by the Federal Energy Regulatory Commission, which imposes fees on petroleum products in the United States to pay the companies’ expenses. These expenses include the pipeline’s physical construction as well as related costs – including lobbying for the pipeline. The costs would be passed along to Minnesotans – with an estimated price tag of $1.6 billion over the next 15 years – through additional taxes on gasoline, plastics, and other petroleum products.

2.) Minnesotans object to the new pipeline. In 2017, MEP’s public opinion poll showed that two thirds of Minnesotans are opposed to moving more tar sands oil across our lands and waters. For that reason, pipeline backers have called the pipeline a “Line 3 replacement” despite the fact that it would carry double the volume oil and follow a different route.

This line meets especially strong opposition from Minnesota’s tribal communities. It would pass through lands that support wild rice and fishing, which are culturally vital to the Ojibwe bands and legally guaranteed to them by treaty. A tar sands spill in wild rice waters would poison the waters and permanently destroy the wild rice in the area, endangering the Ojibwe communities’ health and way of life. For this reason, the Red Lake Tribal Council recently pulled out of an agreement to allow Enbridge to have four pipelines crossing reservation land, and tribal advocates have pointed out that the official assessments of the pipeline proposal do not adequately take tribal rights and culture into account.

3.) In September 2017, the Minnesota Department of Commerce stated that Line 3 is not needed and that Minnesota would be better off without the old or new pipeline. In its analysis, the Department noted that a greening, more efficient economy meant that Minnesota would have no need for the oil transported by the new Line 3, but would suffer harm from its environmental and social impacts. It further recommended that the old Line 3 be removed from Minnesota’s lands and waters.

The Department of Commerce’s recommendation doesn’t have the authority to override the PUC, but it underscores an important concern – the only party with any real economic interest in this this pipeline is Enbridge.

Fortunately, Enbridge was not the only group influencing the PUC in 2017. Advocates and volunteers from a variety of organizations – including MEP partners Honor the Earth, MN350, Friends of the Headwaters, and the Sierra Club North Star Chapter – have made tremendous efforts to shape the process at the PUC and at the Legislature, where a harmful bill putting Line 3 on a fast track was stopped last year.

We thank all the staff, volunteers, and speakers who have worked tirelessly to make Minnesotans’ concerns about Line 3 heard. And we urge the PUC to look clearly at what the evidence shows: Minnesota has no need for this costly, hazardous new pipeline.